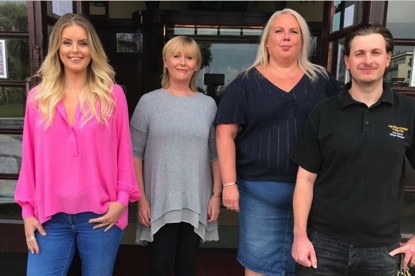 Fighting for the future of the theatre, staff are (from left) Chantelle Shortland, Sharon Waring, Marie Chapman and Tom Martin

The South West’s only unsubsidised theatre may have survived against all the odds through the generations – but it has now hit its most desperate times thanks to Covid-19.

According to Bruce Forsyth the 600-seater Babbacombe Theatre in Torquay has a better atmosphere than the London Palladium – and over the years it has been a commercial success because the packed audiences obviously agree with Brucie.

But now it sits empty and is at risk of permanent closure. Impresario Colin Matthews saved the theatre from the brink of closure when he took over in 1986 and turned it into one of the UK’s top tourist attractions.

Now he and the staff are hanging on to hopes of opening for a new-style, Covid-19, socially-distanced show at Christmas. Because audience numbers will be reduced they will not be making any money, just hoping to save jobs.

And the public can help save the Babbacombe Theatre by supporting their Crowdfunder campaign which is part of a nationwide #SaveOurTheatres initiative to save the future of theatres across the country. 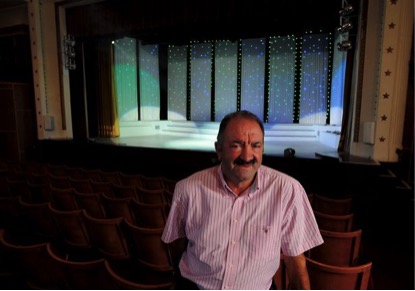 Unlike most venues in the country, Babbacombe Theatre is the South West’s only unsubsidised theatre.

It stands on the site of a small bandstand built in 1920. 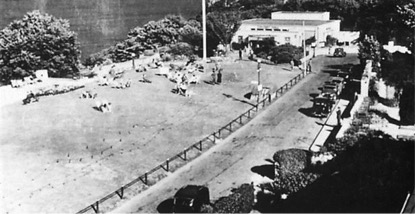 A 1939 photograph showing the site of the Babbacombe Theatre, Torquay

In 1938 The Babbacombe Downs Concert Hall was built and remained virtually unchanged for 50 years during an era before television when seaside variety shows brought in huge crowds. But gradually times changed and it was under threat of closure after a couple of disastrous years – until Colin took over in 1986, updating it with state-of-the-art sound and lighting and a refurbishment.

General manager Sharon Waring said: “Without funding, we have not yet been subsidised at all, we have to look at whether the theatre will be able to be viable, so it is a serious worry.

“We are all prepared to do whatever we need to do keep it open. Colin saved it from closure in the 1980s and he is determined to be able to do that again.

“Colin has had to look at opening for the festive period, because if he didn’t he would not be able to continue to pay the staff which he is keen to retain, once the furlough ends. He knows with social distanced audiences, limiting numbers, he would probably only just cover the wages, but he is prepared to take that risk.”

The Crowdfunder aims to raise £10,000. It says: “Can you imagine a future without this popular local Theatre? We can’t either, but it could become a reality if we don’t act now.

“Our theatre risks permanent closure because we continue to be unsubsidised and funds are paramount to cover our overheads. It’s hard to believe but the Babbacombe Theatre does not receive any subsidy of any kind, yet it is famed for having a ‘better atmosphere than the London Palladium!’ (Bruce Forsyth).

“We therefore need your help to raise £10k to ensure that key staff are not lost during the period when we are closed and after we re-open when there will be reduced revenue due to social distancing.”

We use cookies on our website to give you the most relevant experience by remembering your preferences and repeat visits. By clicking “Accept All”, you consent to the use of ALL the cookies. However, you may visit "Cookie Settings" to provide a controlled consent.
Cookie SettingsAccept All
Manage consent

This website uses cookies to improve your experience while you navigate through the website. Out of these, the cookies that are categorized as necessary are stored on your browser as they are essential for the working of basic functionalities of the website. We also use third-party cookies that help us analyze and understand how you use this website. These cookies will be stored in your browser only with your consent. You also have the option to opt-out of these cookies. But opting out of some of these cookies may affect your browsing experience.
Necessary Always Enabled
Necessary cookies are absolutely essential for the website to function properly. These cookies ensure basic functionalities and security features of the website, anonymously.
Functional
Functional cookies help to perform certain functionalities like sharing the content of the website on social media platforms, collect feedbacks, and other third-party features.
Performance
Performance cookies are used to understand and analyze the key performance indexes of the website which helps in delivering a better user experience for the visitors.
Analytics
Analytical cookies are used to understand how visitors interact with the website. These cookies help provide information on metrics the number of visitors, bounce rate, traffic source, etc.
Advertisement
Advertisement cookies are used to provide visitors with relevant ads and marketing campaigns. These cookies track visitors across websites and collect information to provide customized ads.
Others
Other uncategorized cookies are those that are being analyzed and have not been classified into a category as yet.
SAVE & ACCEPT